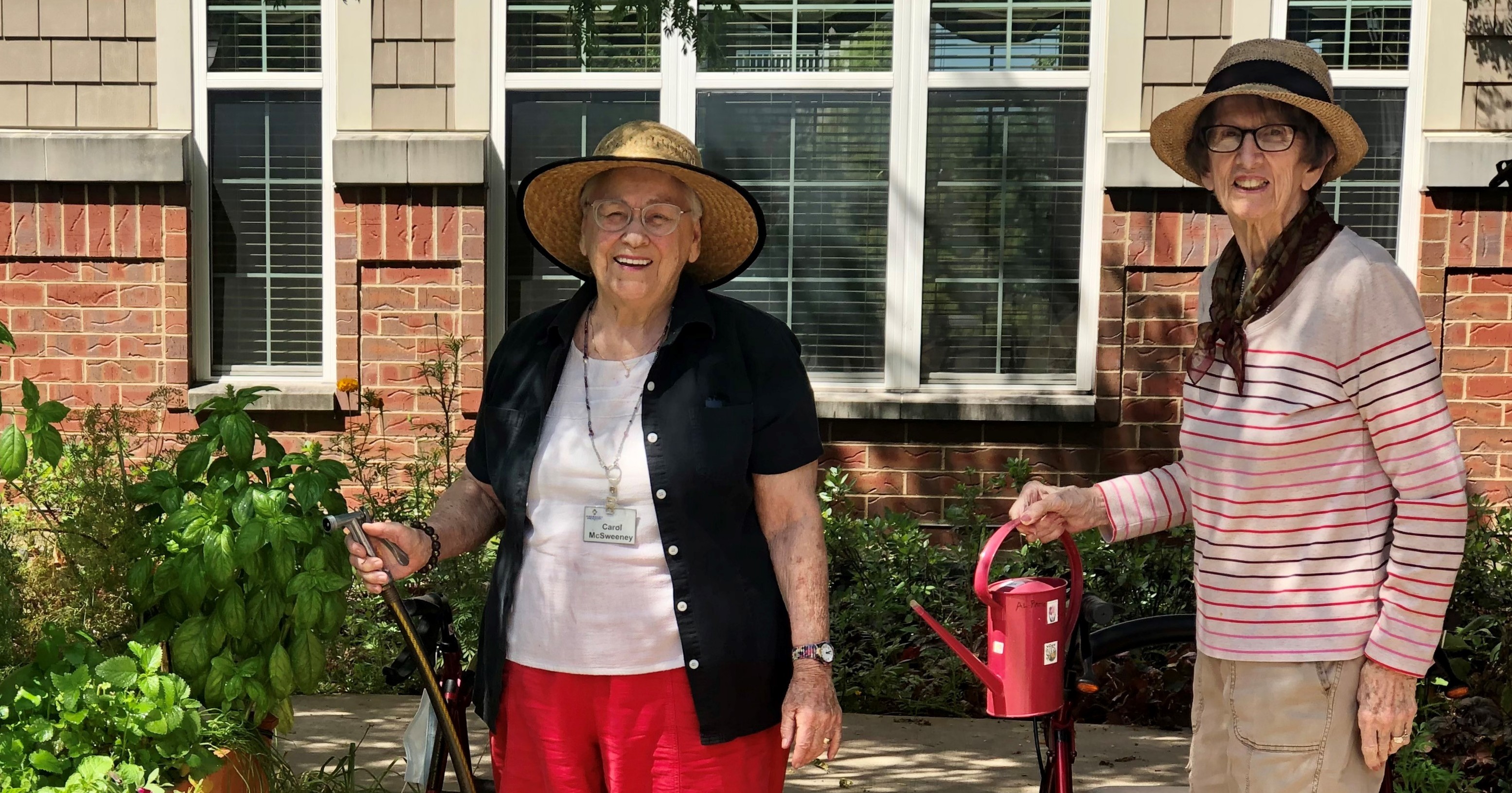 Carol McSweeney was excited when a raised box garden arrived at Aberdeen Heights earlier this year. With the elevated garden container, no one has to bend or stoop to enjoy the sight, smell and feel of nature’s bounty.

“It’s about 4-foot tall,” Carol said. “We planted about 12 or 14 herbs in it — and they were outgrowing each other, so I had to prune them. The secret was I used soil that had Miracle-Gro in it already. It’s lush and luxurious.”

“We have basil, thyme, just a variety of things,” said Barbara Hollenbeck. “It’s a good thing for smell and texture. We also have lamb’s ear and lavender. We did harvest some basil, and a friend came to pick it up and made pesto and brought it back. I have it in the freezer and share that with the tables in the dining room.”

From assisted living, where Carol and Barbara tend to the box garden, and into the health center and memory care area, gardens provide an important role in residents’ health and engagement.

Debra Leland, who works in skilled nursing, said their garden has been a great tool to bring residents together and to share in a community activity.

“The garden club planted the veggies, and the residents get to come out and enjoy that,” Debra said. “We got some of the rolling boxes, and we planted petunias, and we’ll be planting some bulbs soon. Most of our residents are in wheelchairs, so we’ll sit outside around the gardens and watch the birds come by. Several people have bird feeders, and we even have a rabbit that comes hopping through here.”

Aside from the activity, Debra said the gardens are a great way for residents to remain connected to activities they’ve always enjoyed.

“Several residents did gardening before they came to Aberdeen,” she said. “Some just like to be out in the fresh air. For the people who loved gardening before, it’s good mentally and physically.”

When it comes to the outdoors and wildlife, however, few things seem to catch as much attention as Carol’s “pet” turtles.

“At 7:15 a.m., you’ll hear her banging on the concrete because she’s feeding the turtles,” Barbara said. “When it gets cold, they’ll be hibernating, and we’ll have to wait until spring to see them again.”

Carol said when the temperature nears 40 degrees, the turtles will turn in for the winter.

“We’re going to have so many turtles — they’ve been doing their thing again,” Carol laughed. “We’re starting to see new baby turtles. It is fascinating. People are constantly asking me about the turtles. But they’ll go to bed in October, and we won’t see them again until April. They’ll bury themselves in the garden and stop coming to the food platters. I don’t put food out again until I see one walking around.”

Posted on
September 21, 2021
by
filled under
Aging Well
Activities
Residents
« Back to Blog