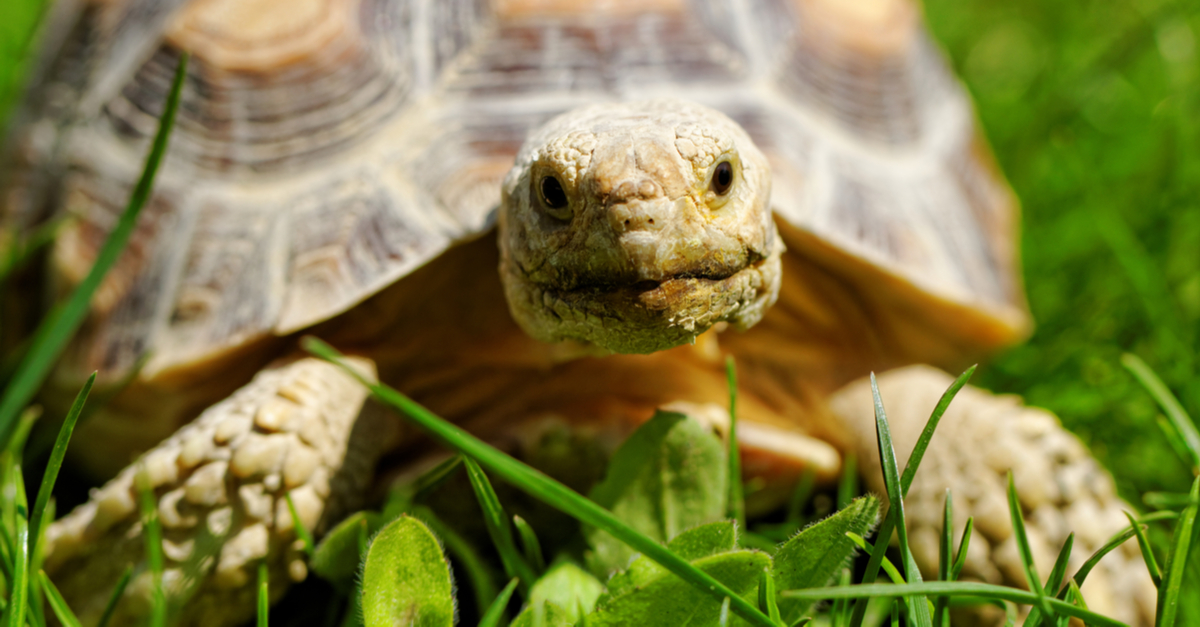 One might call Carol McSweeney the turtle whisperer. Despite her skill in taming the community’s wild turtle population, there’s not much else that’s slow about this 89-year-old Aberdeen Heights resident.

“I’m so tickled with my turtles,” Carol laughed. “I had them as a kid in Kirkwood, so I thought I’d see if I could train them like I saw on TV.”

Carol explained that she’s a big fan of the show “Aquarium.” She watched how workers on the show train stingrays to come to a designated feeding area by beating a regular pattern on the aquarium wall.

“That happened to be the same day I saw a big box turtle by the patio out back,” she said. “I had some lettuce, berries, and veggies left from lunch. It’s like a big buffet. I set it outside my door, then hit the sidewalk with my wooden spoon five times and went back inside.”

When she looked back outside there were three box turtles “already scarfing up the vegetables.” Nowadays, it’s not uncommon to see up to eight turtles enjoying Carol’s breakfast offering — including several baby turtles that come out from time to time.

“I consider myself a turtle trainer,” Carol said. “It’s been a lot of fun. Most people are really enjoying it. Anyone who walks down the hallway down to the dining room can see them. Everyone gives me an update on what they’ve been seeing.”

Turtle feeding has become a morning ritual that takes place around 8 a.m. when Carol is done with breakfast. She hasn’t named them, and doesn’t try to “get too friendly” with them. She sometimes peeks her head around the corner to make sure they’re doing OK — which can be enough to startle the gentle creatures.

“I’m having a ball,” she said. “I’m a nature person, and I used to feed turtles at our old house out in the woods. That was 25 years ago.”

While Carol’s claim to fame might be turtle training, it’s just one of the many things she does to keep herself busy.

“I can’t sit around watching TV all day,” she said. “I can’t read because my vision is going. But I’m full of ideas of things to do.”

Those include helping Life Enrichment Director David Evans hold an outdoor painting class where a group of residents tried their hand at pastels.

“I sort of became David’s helper. He set everyone up really well,” Carol said. “He provided a picture of a tree for everyone to copy, and I just gave them tips and suggestions.”

Carol said she’s also working with David to plan a sensory garden, similar to one she helped plant as a volunteer with an organization serves blind children.

“I happen to have a blind child, and I found out 65 years ago there were no services for blind children,” she said. “A sensory garden has flowers and herbs that smell, along with a couple of wind chimes for sound and a bowl of water to splash in. I’ve found my list of flowers, and we need to have a dish in it with white sand — because that’s the only way a butterfly can get a drink — and a bigger dish for birds to splash and take a bath in. It’s hilarious to watch. I haven’t talked to David about that, but I’m sure we’ll get it done.”

She also has ambitions to spearhead an effort to enter a Lego building contest, and she has already ordered her first batch to one day get this project off the ground.

“I have just been inspired by some of the things you can build with Legos,” she said. “Anyone can do it, and it’s great for autistic children. But I ordered my first set and it’s intimidating — it’s the skyline of London.”