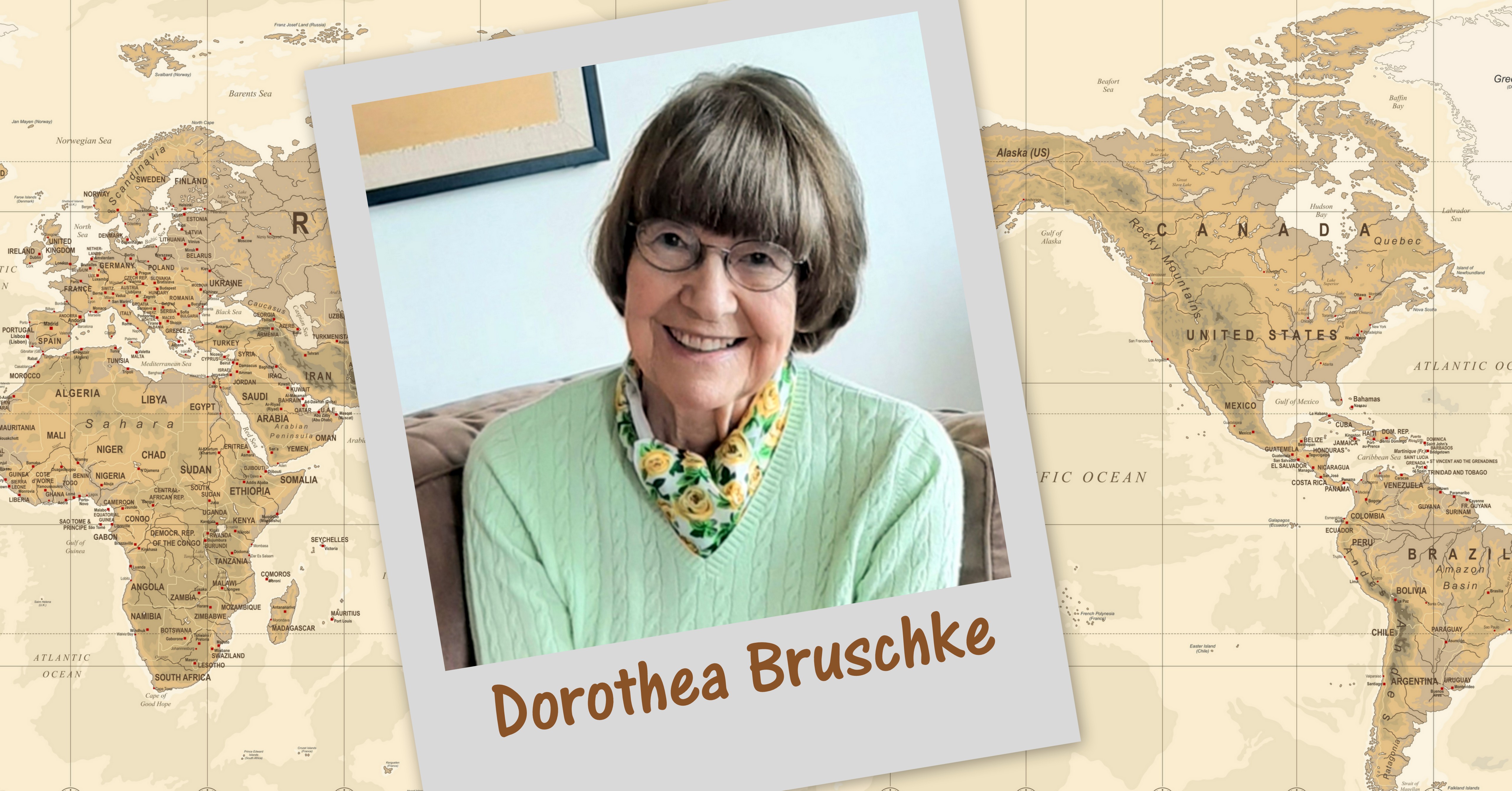 Dorothea Bruschke was born in Munich, Germany, in the early ‘30s during the rise of Hitler. Because of her father’s heart condition, he avoided the draft and helped his family of five leave Berlin on the last cattle car out before the Russians took over. The family settled near the town of Eisleben in Saxony. However, after a few months, the American occupation there ended, and the Russian one began. That changed life drastically. They were moved to the cement laundry room and hallway at the pastor’s house. After many months, they ended up in two rooms of a large farmhouse, no private kitchen or bathroom. She could attend the local high school only through grade 9 because her father was not a laborer or farmer.

At 17, her father sent Dorothea back to Berlin in 1947 to continue her education. The family’s Berlin house was occupied by five families, so she went to live with another woman and helped with her book binding business. It included putting stacks of books into a press on the floor. She injured her back, ending up in a hospital for 8 weeks, lying on her stomach.

From 1948 to 1950 she was a student at a well-known school that trained kindergarten through eighth grade teachers. In 1951, Dorothea went back to high school to get her state diploma at the only academic evening high school in Berlin. That is where she met Henry, and they both passed their state exams. Then they could go on into higher education.

In 1956, Henry won a Fulbright scholarship to the University of Minnesota and wanted her to come to America, too. He found a professor who was going to Berlin for a conference who would interview her. Three months later, Dorothea was in the U.S. on an assistantship, teaching German in the Campus Schools for grades three to 12 while taking classes herself at graduate school. She finished her Master’s Degree in 1961.

The couple had married in 1958. At U of M there was a foreign student office where one could borrow warm clothing for the cold winter. They even loaned them all the furniture they needed. Dorothea was very impressed with the friendliness and generosity of Americans.

In 1961, she took a job with the U.S. government in New York City, where she worked on student text books published by Harcourt and Brace. Later she finished the job, writing the teacher’s editions to accompany them. She loved the work, but it was her marriage or her job, as Henry was tired of commuting to NYC. In 1963, she moved back to Minneapolis, teaching German in a public high school.

Henry accepted a position at St. Louis University in 1965 as Assistant Professor of Economics. Dorothea taught German from 1966 to 1980 at the Maplewood-Richmond Heights High School. Then up to 1995, she was the Coordinator of Foreign Languages for grades 7-12 in the Parkway School District. She created the “English as a Second Language Program” in Parkway for grades 1-12. Dorothea always received great support from her superiors to try out new ways in Foreign Language Education. She believed the way to teach languages was the Audio-Lingual approach—teach listening and speaking before reading and writing. This new approach for learning a foreign language was supported by the U.S. government with eight-week summer institutes for teachers of French, German and Spanish. Dorothea taught those courses for five summers.

When she and Henry retired, they looked at all the senior living possibilities in St. Louis and chose Aberdeen. They moved in November 2011 and were very pleased with the care Henry received in The Glen the last five years of his life. Dorothea is very grateful for all the kindnesses and opportunities she received from America and Americans from 1957 to the present time!