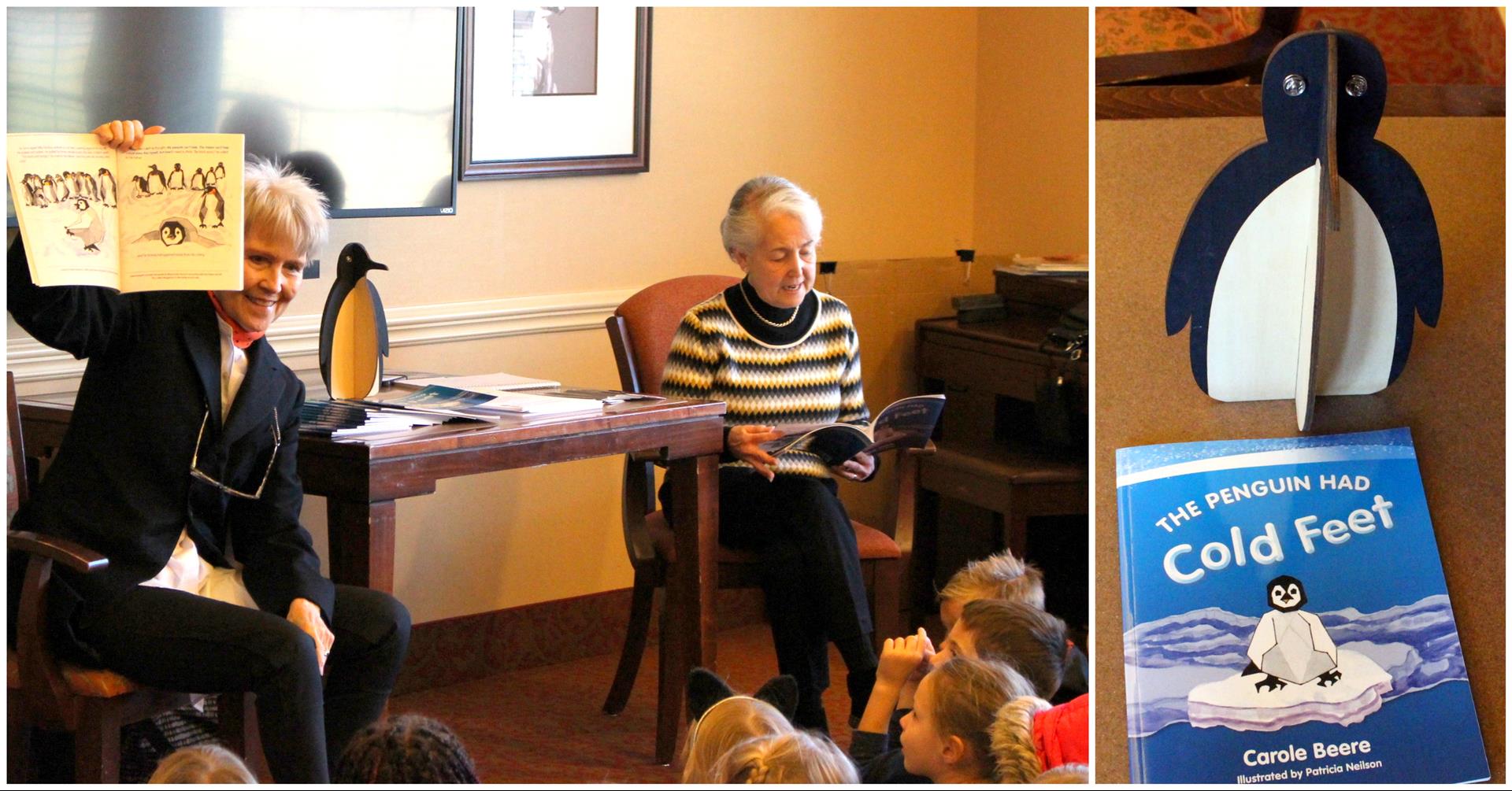 Adventures abound when a penguin gets cold feet

If the idea of a penguin getting cold feet doesn’t make sense to you, then you haven’t read the children’s book written by Carole Beere and illustrated by Pat Neilson.

The duo visited Aberdeen Heights to share their collaboration The Penguin Had Cold Feet. The story follows the adventures of Markus, a baby emperor penguin. Moments after hatching, Markus announces his feet are cold. He sets out to find a solution on his own when no one in Antarctica knows how to help.

“I often get asked how did I come up with the idea, and I don’t know,” said Carole. “This has been five years in the making. The toughest part was we couldn’t come up with a solution. That took the better part of a year of talking with my grandkids to come up with an answer.”

Carole published several books and journal articles during her career as an academic, but writing a children’s book used a different skillset.

“I have written quite a few books, but not for this audience,” Carole said. “My grandchildren who live in Germany would ask me to tell them a story, so I’ve always made up stories. I used to make up stories when I was a kid, and I would pretend they were true, though it was clear they were not.”

What is a true story is the friendship that developed between Carole and Pat as they collaborated on the book.

Pat, who worked as an art teacher for more than 20 years, lives in the same building as Carole.

“Pat’s my neighbor,” Carole said. “We started to get to know each other. Finally, I got my courage up, and she said yes!”

“That’s when we became closer,” Pat said. “We had a system. I would draw a page, and before going on, I’d show Carole. In most cases we totally agreed. We did something very important — we talked about it before I drew anything.”

To better illustrate Markus’ plight, and perhaps just for a bit of extra fun, Pat dresses in full penguin regalia to attend readings.

“The same grandfather who got me into teaching had a black tuxedo, and I found it two years ago on his farm,” Pat said. “I put it on and it was almost perfect. I said I’d wear it every time we read the book.”

To achieve the penguin effect, she wears a bright orange turtleneck under a white shirt and black shoes.

“I’ve perfected the walk,” Pat said with a laugh.

Carole wanted the book to be both imaginative and educational. In addition to the lessons on problem solving, each page contains “fun facts” with scientific information about emperor penguins and life in Antarctica. Carole and Pat also teamed up with the National Science Foundation for a companion website to the book. Coldpenguinfeet.com includes photos, coloring and word activities, and educational games.

“We have an orca and a leopard seal in the book, and we give accurate information in there about what size they are. There is a lot of science in the fun facts,” Carole said. “Of course, if either an orca or a seal came across a penguin, they’d eat it. One person said that something in the book wasn’t true. I told her it’s also true that animals can’t speak English — but we have the fun facts.”

Sharing the book at Aberdeen Heights was a fantastic experience, both Carole and Pat said.

“It was fun!” said Neilson. “The kids asked all the questions during the time they were there. When they left, the residents started asking questions.”

Not unexpectedly, a question arose about the tuxedo jacket.

“I did a little modeling and told her the whole story,” Pat said.

Posted on
December 5, 2019
by
Cindy Kelly
filled under
Art is Ageless
Activities
« Back to Blog